Occasionally, one of us has the benefit of working from home for as much as a week. In a last-minute “weather’s terrible, I’m off to the Algarve” decision, I managed to pick-up flights for £85 return with British Airways. With the legroom being the same at the back as it is at the front, the flight being so short, and Club Europe fares three times the price, I was very happy to fly economy on BA for such a good price. Here’s an honest review of my British Airways Economy Class flight from London to Faro .

Having already checked-in through the BA app and equipped with my iOS boarding pass, I avoided the check-in area altogether and went straight up the staircase situated in the arrivals area. A quick left and the right turn brought me to Gatwick Premium (Fast Track) security, which I was able to use on a economy ticket because I have BA Silver+ status. Security was very busy, although moving passengers through with speed – entering to leaving took just 7 minutes.

As no lounges are routinely provided with an economy class fare, I visited some of the paid lounges. Read the reviews of Gatwick South Terminal’s paid lounges. I also spent some time looking at the seating areas provided around the terminal. The lower level of the departures area is predominantly retail, with a some seating areas in-between. While many more rows of seats are provided on the upper level, this area regularly becomes congested and seating scarce. The seats aren’t that comfortable – like the ones you’d find in any waiting room – they’re packed in, and it’s all so poorly arranged that you see passengers frustratedly trying to escape by climbing over the seats. If you’re planning on arriving at Gatwick South Terminal any more than 2 hours before your flight, I’d strongly advise getting a table in one of the many restaurants on the upper floor, or book into one of the paid lounges to escape the melee. This is especially true during peak holiday periods, when the place becomes a vision of hell.

Having spent too long in the terminal, I was the last to the gate. The staff looked relieved to see me – they knew I hadn’t been in the BA lounge and had no trace of me since security. I think they were worried I’d gone rogue! After a quick giggle about the number of lounges I’d been running around, they sent me down to the air bridge. Instantly, the enormous queue to board told me I wasn’t that late to the gate! The queue moved fairly quickly and I was soon at the aircraft door and being greeted by the cabin crew. After a short shuffle through a very full Club Europe cabin, I arrived at my preferred economy seat, 12A. The cabin was about 2/3 full, so there was still ample space in the overhead lockers.

G-MIDT
Aircraft type: Airbus A320-232
Number of classes: 2
Number of seats in flying class: 120
Position: left hand side of the aircraft, exit row 12
There were also a further 32 business class (Club Europe) seats across the first 8 rows of the aircraft.

If anyone can help us locate the seating plan for an A320 with this configuration, please get in touch.

Being a short-haul economy flight, there was no amenity kit. BA hand soap was provided in the onboard washrooms, with the fancier White Company products in the washroom at the front. Speaking of which, there were two washrooms at the rear and they were extremely small. Despite their size, they were clean and well-stocked.

While it’s an awkward topic, it needs to be said that if you’re on the larger side, you might have a few challenges with the economy washrooms on this aircraft type. It is very snug. If it’s not comfortable, ask the crew to use the slightly larger one at the front.

The front washrooms looked in a similar state to the ones we’d recently experienced on a flight to Ibiza. The plastic was stained brown and looked in dire need of a refit.

I chose to sit in 12A, which is an exit row window seat on the wing. 12B was left empty throughout the flight, with another gentleman sat in 12C on the aisle. This made it the same seating configuration as Club Europe, but with extra legroom. Winner!

Upholstered in comfortable leather, the seat has a modest recline, which I found just about sufficient to stop my head rolling forward while having a doze. Being a window seat, there was no armrest on the window side, but there was a little ledge moulded into the window to compensate.

There’s a reading light in the panel above the seat, along with the all-important air nozzle. You will need this at least once during the flight as the cabin temperature will yo-yo.

Excepting the seat back pocket, there is no storage around the seat. Storage underneath the seat in front is possible, although that eats in your legroom. I was on an exit row, so no under seat storage is permitted during take-off and landing.

There is no at seat charging on short-haul BA aircraft, so be sure to charge-up in the terminal beforehand, or bring a portable charging device with you.

We’ve spoken a lot recently about cleaning aboard British Airways aircraft, so I was keen to see how it scrubbed-up. The seats and surrounding floor areas all appeared clear of debris. The magazines were typically dog-eared, but present and correct along the row I was seated on. This aircraft appeared well-presented.

What is the best seat on British Airways A230 economy class? My recommendation is 11A, C, D, and F or 12A, C, D, and F. These seats are on the exit rows midway along the cabin. You’ll be afforded extra legroom and will have very little footfall past your seat. Seats A and F have a view over the wing, whereas C and D have direct aisle access.

Strangely, both SeatGuru and BA’s seating plan for this aircraft type shows row 13 being an exit row. It isn’t.

Seats to avoid: There are no windows on row 30, no recline and also severe disturbance from galley behind and traffic to/from the toilets. No matter what you want to do you on your flight, you won’t be comfortable doing it here.

Although seats on row 29 have a full recline, they aren’t far enough from the toilets/galley to avoid being disturbed. Window-gazers will also be disappointed by the partial window view.

See the seating plan on SeatGuru – this seating plan isn’t quite the same as the A320 I traveled on. Get in touch if you know why.

There are no in-flight entertainment screens on BA short-haul aircraft, so entertainment either comes analogue in the form of the Highlife magazine and free newspapers from the terminal, or whatever gadget and headphones you choose to bring with you. You can also talk to people and try to make plane friends, although this is a risky strategy and only best attempted after a large gin.

We normally talk about the food and drink separately. As they were inextricably merged together on this British Airways economy class flight, we’re going to discuss them as a single feature.

Two members of crew work front-to-back with a trolley serving food from an M&S snack menu. Despite only being October, Christmas had already made its brash and unwelcome arrival on the menu. Festive sandwiches, pies, bubbly, beers, wines and spirits all appeared with baubles. The crew accept payment on card or by Avios, but do not accept cash.

Health warning: the onboard Avios/£ rate is shockingly low – 1.5p/Avios – with a £4 sandwich averaging 600 Avios! With good BA flight redemption, we can get 4x that value – a whopping 6p/Avios.

Tea was served as hot water in a large paper cup with a Teapigs tea bag on the side. 2 sachets and UHT milk and a sachet of sugar came in a clear plastic cup. It was a nice brew, but felt like a awful lot of packaging for what is essentially a mug of tea.

Coffee drinkers may be surprised to learn the old onboard brew has been replaced with coffee bags. These usually deliver a weak/watery filter coffee and are best-avoided, especially at £2.50 a pop. Grab one in the terminal and bring it on with you.

The crew worked efficiently and moved down the cabin quickly. The trolley returned 20 minutes later to collect trash. For the remainder the of journey the crew remained in the galley area at the rear of the aircraft. Unlike other carriers in this price bracket, there was no shouting on the tannoy about scratch cards or special offers on J Lo perfume.

For those interested in what was on offer at the front of the plane, I snook down and took a look at the menu. The upgrade offer for Club Europe on this flight was £89 one way. Given the seat is exactly the same as British Airways Economy Class, and that BA breakfast isn’t worth more than £15, I’d have to be planning to drink my way through a lot of Nicolas Feuillatte, gin, and Baileys, or I’d struggle to see £89 in value. I have been known to do it, but on this occasion I had a hire car waiting for me at the other end. Let’s also not forget the condition of those toilets down the front.

Once again, the aircraft was late off stand due to air traffic restrictions – the joys of living on a wind swept island at the edge of the North Atlantic in autumn!! We then had a long, slow taxi to the runway behind a line of about 6 other aircraft. Getting airborne 30 minutes later than scheduled and hitting strong head winds down to Portugal meant landing 30 minutes behind schedule.

After a smooth flight and approach into Faro Airport, we had a very short taxi to gate 320 at the main termtinal. An air bridge was attached to both the forward door.
E-passport gates were closed, so there was short wait at passport control. With only hand luggage, I found myself at the car rental desk within about 15 minutes of landing.

The flight was perfectly comfortable. The friendly cabin crew operating the trolley delivered the food and drink service with efficiency. At these prices, British Airways Economy Class flights to short-haul destinations represent excellent value for money.

Do not sit on the last two rows in any BA short-haul economy flight. Don’t say we didn’t warn you! 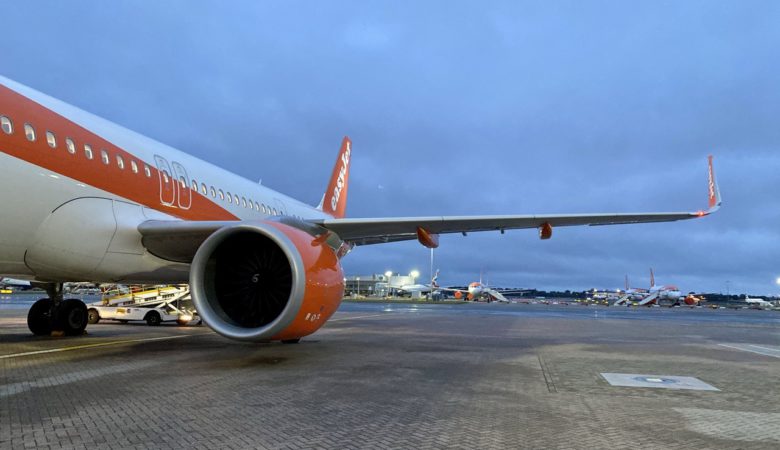 Easyjet to Dalaman During Coronavirus 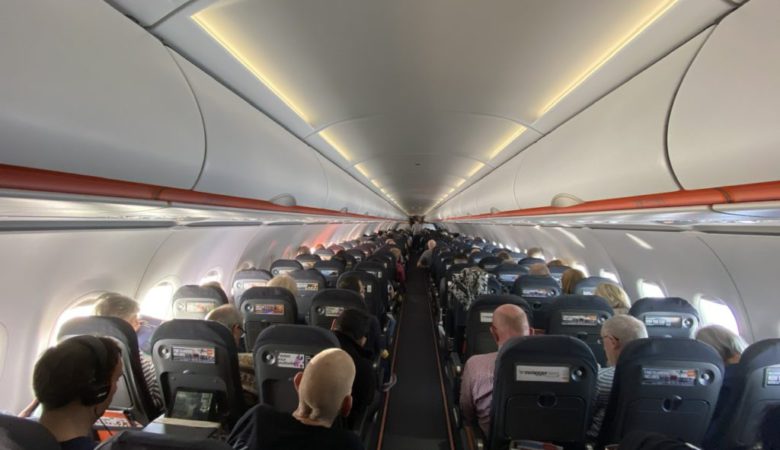